In the final Ladies match in the Homa Bay County Cultural Festival, Victoria FC from Kendu Bay and the Suba Lakers from Mbita entertained the fans at Homa Bay Stadium with a very exciting match.  The two rivals locked horns knowing that a win would earn them a 1st place finish because they were playing in a league format.  In case of a draw, Victoria would emerge as the champions due to their superior goal differential they earned when they thrashed Sophia Queens 4-0 in the opening match.  The Suba Lakers had to struggle to a 1-0 win over the same Sophia Queens when Leah Ongojo made a superb individual performance taking the ball from the center line and beating the defenders before she smashed it against the goal post, but with a never say die attitude she circled back to collect the ball again and place it past the goalkeeper and inside the far post for the win.
Against Victoria, the Suba Lakers started slow and were dominated in the first half though it remained scoreless.  The momentum changed in the second half with the Lakers taking control, but Victoria was the first to score on a rebound shot with 8 minutes remaining.  Undeterred, the Lakers responded within a minute to even the score at 1-1 on a beautiful header by Judith Oketch.  Both teams battled to put one more across the line in the closing minutes, but it remained 1-1. 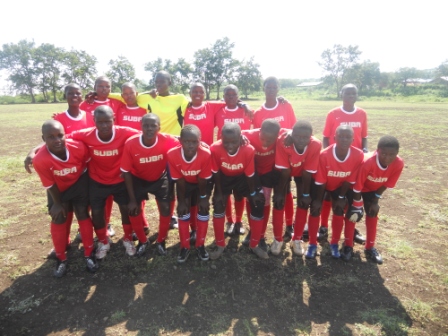