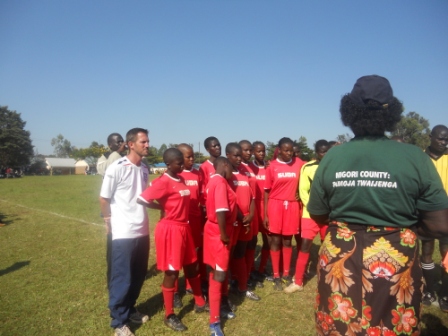 It was a chaotic week with so many different things going on.  We were playing in two tournaments at the same time in two different towns, the 8th Grade National Exam results were being released (we had 9 players that sat for those exams), and five of our players were given the opportunity to travel to Eastern Province to try out for the Kenya National Under 17 team.  Juggling all of those balls was complicated.
On Wednesday in Rongo we began receiving calls from a lady in Homa Bay telling us that we had to play some of our matches there that day even though earlier the secretary said he could schedule all of our matches for Friday and Saturday.  So we were planning on leaving after our final preliminary match in Rongo to go to Homa Bay to play 1-2 matches.  Unfortunately during our game, the chairman called all of the team managers and talked very strongly that if any team goes to Homa Bay that would not be able to come back and finish this tournament.  We had to choose one or the other.  I was getting pressure from both sides so I prayed for God to show us the right decision.  After a few minutes the chairman came over to me and asked if I was doing ok.  I told him no and began to explain our problem.  This same man who was so vehement a few minutes ago turned very kind and said that it was no problem if we wanted to go and come back as long as we didn't tell anybody else.
So we piled the team in the landcruiser and drove a half hour down the road to Homa Bay.  We lost the first match and won the 2nd match.  But during the afternoon, the organizers in Rongo began calling me to say there was another team that showed up 1 1/2 days late and we had to come play against them (kind of difficult since we were in Homa Bay).  We didn't go back for that game.  Then someone else told us they wouldn't let us sleep in the dorms that night since we had left and gone to Homa Bay.  Coming back to Rongo I told our girls to stay very calm and peaceful and let the officials handle things.  I didn't want them quarrelling or shouting or rioting.  When we came in to the school compound where we were sleeping, they had men with sticks ready to chase us away.  They said we were not welcome back.  We talked very calmly to them and within five minutes the girls were eating dinner and in their rooms preparing to go to sleep.  In stark contrast, another team in a similar situation never got permission from the chairman and when they came back, they were shouting and singing and causing all kinds of problems.  They were not allowed to spend the night there. 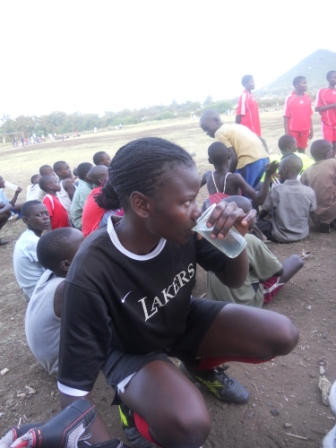 So the next morning we were told that they gave the other team a walkover because we weren't there for the match.  Instead of quarrelling with them I just wrote a letter of protest explaining that originally we were scheduled to play them on Tuesday afternoon.  We were ready for that match, but the other team never came that day and never showed up until Wednesday afternoon.  And at that point we had been told our preliminary matches were finished which is why we went to Homa Bay.  Both of us had qualified for the semifinals but if the other team was given the walkover then it would mean that we would have had to play the best team in the semifinals instead of the finals.  After meeting for several hours they decided to allow us to play the match immediately which was a fair decision but put us at a disadvantage since we would have to play that match, then the semfinals, then the finals back to back to back.  We were able to win that match and the semifinal but ran out of gas in the 2nd half of the finals against a good team.  Six matches in two days was a lot, especially when the 2nd day all three matches were in a row and all at different locations that we had to travel to on foot.
Posted by Joe Peterson at 5:10 AM