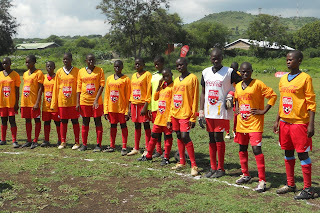 The Under 15 version of Suba Lakers kicked off the Coca Cola Tournament with a 3-0 win over Kuria Ladies.  The Coca Cola Tournament is being stages in different branches all over Kenya and several other countries in Africa.  The winning boys and girls teams from the branch levels will move on to the Provencal level and then National level.  The National winners will have the opportunity to travel to South Africa to face other National winners from the across the continent.

Three years ago the Suba Lakers won the branch and reached all the way up to the semifinals of the Province.  In their first game of this campaign the 12, 13 and 14 year old girls dominated their first match from start to finish, making a strong statement to the other teams watching that they are once again the team to beat.  Winny Akinyi and Lenser Adoyo both scored goals in the first half and the defense anchored by Cynthia, Florence, Jacinta and Sisk Verah didn't give the Kuria Ladies any good chances to score past Goalkeeper Lillian Awuor. 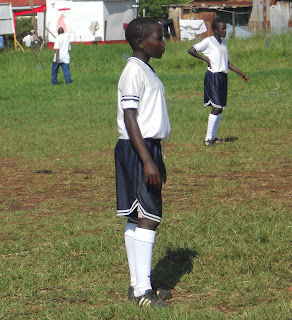 In the 2nd half, the Suba Lakers continued their dominance and the youngest and smallest player on the field, 12 year old Brenda June, netted the teams third and final goal.  Brenda was selected by Coca Cola as the player of the match.

It was a good beginning for the Lakers.  This first game was played in Rongo.  They will continue with more Coca Cola games on May 25th in Homa Bay.

Posted by Joe Peterson at 8:58 AM No comments: