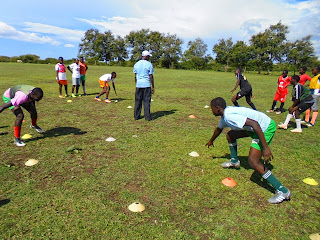 Primary school girls, secondary school girls and even some college girls participated in the Suba Laker Day on Saturday, May 2, 2015.  Eighteen of them had recently competed against each other in the KYFA Nationwide Ladies Tournament playing for their school teams, but on this day they were all back together again as one team.

Coach Dave and Coach Paul had recently attended a coaches training organized by the Kenya Football Federation.  The training was done by German trained coaches.  Coach Dave and Coach Paul were able to put into practice the things they had learned during this one day training with the Suba Lakers.  They subjected the players to a lot of drills and good teaching, but there was also some time for fun and games. 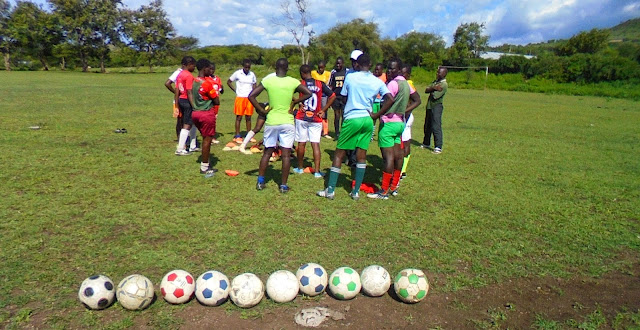 These girls love coming back together and sharing stories.  Some of them secondary school girls were given time in front of the large group to share their team’s experience at the KYFA tournament.  While a number of the  primary school girls shared their experiences during the ball-games which took place during Term 1 in March and April. 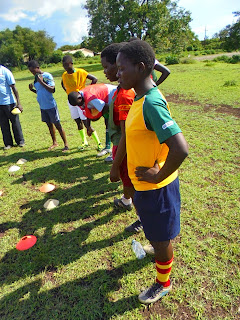 Visitors from a YWAM team in Los Angeles attended the training and helped out in different ways.  The girls just enjoyed spending some time with the visitors.  A special guest from Suba Environmental Education of Kenya (SEEK) also had time to share with the girls about making good choices in their lives.

Our secondary girls all travelled back to their boarding schools two days later to start Term 2.  They were excited for their school soccer season this term and to see which of their school team will win the Regional tournament, go to Nationals and get bragging rights over the other Suba Laker girls.

Pray for a successful Term 2 in the classroom and on the field for all our girls!
Posted by Daneen at 8:11 AM No comments:

At the end of April, 18 Suba Laker girls participated in the annual KYFA Nationwide Ladies Tournament.  For the past 8 years, the Suba Lakers have always brought our own teams to participate in the Open Age category and in the Under 15 category.  This year was different because so many of their school teams were participating in the tournament to try and help them prepare for the upcoming season in Term 2.  Even though we didn’t participate as a club, we were thankful that so many of our girls were able to participate in the excellent tournament.

What makes the KYFA tournament special is that all of the teams “camp out” together at a local primary school for 3 nights.  Each team sleeps in a different classroom, but they share their meals together, interact around the campus and KYFA brings in successful women from around the country who share with the girls from their own experiences and motivate the girls to strive for success in other areas of their life besides only soccer.

The soccer part of the program has become more and more competitive each year with most of the best secondary school teams from around the Lake Region, Western Region and usually a couple of strong club teams from Nairobi or other places. 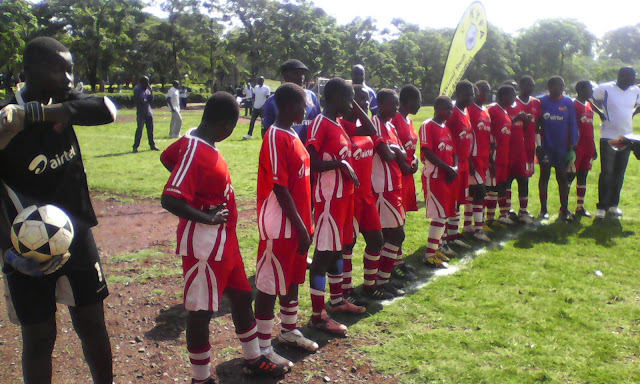 The Suba Lakers had 5 girls playing for Jera, 2 girls for Kobala, 5 for Mawego, 3 for Nyakach, and 3 for Ugari.  Kobala was in a very tough pool, but played very well drawing with eventual champion Nyakach and powerhouse Tartar while defeating Lubino 2-0.  Caren played outstanding leading the team from the midfield position.  Unfortunately they weren’t able to advance to the semifinals.  Ugari and Mawego were also not able to advance to the knockout stages.

Jera performed well in their pool winning three games (1-0, 1-0, 1-0) and losing one to a strong Soccer Queens team 2-0.  They finished 2nd in their pool and moved on to the semifinals where they lost to the Tartar in a close 1-0 game.  Jera was only playing with their school going girls while Tartar had also included some girls who had finished school already.  In the 3rd place playoffs they again lost to the Soccer Queens by the same score as their first match in the preliminaries 2-0.  This placed them 4th.  All five of their Suba Lakers played a lot and contributed to their success including Teresa, Leah, June, Raisha and Alicent.  As a 1st year student, June is fitting in well on the team.  Leah played outstanding defense and Teresa was able to play well in a new position as a wing.  Alicent, the Jera captain, unfortunately suffered a knee injury and was limited from the 2nd game on.

Nyakach finished the pool play with 2 wins, 1 draws and 1 loss.  Their wins came against last year’s National Champions, Butere, 1-0 and a 5-0 trouncing of Lubino.  They finished 2nd in their pool and were matched up in the semifinals with Soccer Queens.  The game went to post-match penalty kicks where Suba Laker goalkeeper Lillian Awuor won the match for them by saving 1 of the 5 penalty kicks.  In the finals Nyakach got revenge against the only team that had beaten them in the tournament, Tartar.  They flipped the score on the earlier 1-0 loss and this time beat Tartar 1-0 to win the finals and capture the 1st place trophy.  It was an important win for Nyakach to give them confidence heading into the secondary school soccer season.  The past two years Nyakach has lost in the Regional Championship, being denied an opportunity to go to Nationals.  Lillian was the most outstanding goalkeeper of the tournament, helping her team win the championship.

We are grateful that so many of the Suba Lakers had the opportunity to play in the tournament.  Playing many matches against strong competition will make each of them better and improve their teams.  It will be fun to see which of these teams is able to win the ultimate prize and capture the Regional Championship in July!
Posted by Daneen at 1:58 PM No comments: