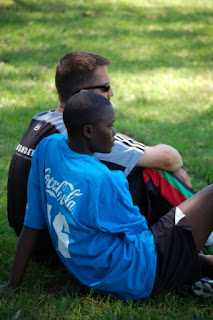 Spending time with "Uncle Joe" and the Suba Laker girls was awesome. We met with them at the school on Friday afternoon and walked up the hill to the "pitch". We watched them practice and even kicked a few balls ourselves. These young women are learning so much more than a sport from the opportunity to be on this team. They are learning committment, determination, self-confidence. They are learning that hard work is good on and off the field. Uncle Joe makes sure that they are keeping their grades up and that they are setting a good example in their communities. They are great girls who love to have fun also. We were able to spend the night with them and had a great time. We had time together at night to do some crafts. We had a time of encouragement and story telling. It was wonderful! Please pray for the girls and pray for Joe. He has truly answered God's call and is impacting the lives of young people through this team while also being very involved with the children at CGA.
Posted by Joe Peterson at 11:56 PM No comments: 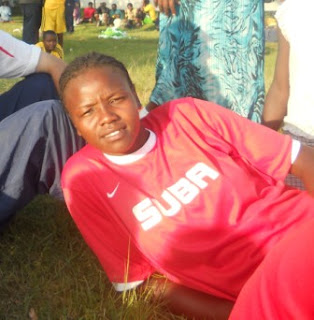 A couple of visitors came to spend time with our primary school girls last weekend.  They brought some great gifts for them and wanted to share with them.  Before coming they had discussed the idea of trying to sponsor one of them in their education.  They expected to find all primary school girls, but they also found one that has finished secondary school.  Elizabeth (Liz) impressed them immediately because of her good attitude and the fact that she is offering her time to help us take care of the primary school girls in the camp.  She even comes to school to help train the school team.  Liz has faithfully served with the club since December and the visitors felt like God was directing them to help her continue her education.

Liz took her secondary school national exams in November 2010, but she didn't do very well because of circumstances in her home.  She was going to a local day school but it was a long walk to and from school each day.  Since her family doesn't have any consistent income, she was not able to go beyond secondary school.  She has been hoping and praying that God will open the door for her to continue.  I even asked her recently why she hasn't gotten married or pregnant like most girls do at her age in this area.  She replied, "There is a time for everything and the time to get married will come later, but now I want to continue my education."

One funny part of the story was when she joined the club in December we talked with her and told her she was welcome to be a part of us, but we wouldn't be able to help her at all financially or be able to do anything for her in the future as far as education.  She said that was ok and just faithfully trained with our players and served in various ways.

Her father’s home is in Seme which is located in Kisumu West District, in a rural area.  Her father is one of five brothers.  All of them are polygamists with many wives and many children.  Each of them is now elderly and they have all retired or been retrenched from their previous jobs.  In Liz’s family there are three wives and a total of fifteen children.  Liz’s mother had three children, but one passed away so it is only Liz and her older brother who are remaining.  Her older brother did some training in electrical engineering and is working in Nairobi currently.  Their mother never finished secondary school because of a lack of fees, but works as a volunteer community health worker at times.  The father used to work for Kenya Ports Authority in Mombasa as a baggage handler.  Unfortunately, many years ago he was forced to retire and was given no pension.  He now has a farm and uses it to provide food for his family though it doesn’t generate much income.  Liz and her brother are the first in their extended family (over 50 children) to finish secondary school.  She is a very pleasant, happy girl who has been faithful in her responsibilities and has resisted pressure to get married because she desires to go further in her education.
This week we began visiting different colleges, universities and polytechnics to find out the different options that she has and what area she might be interested in.  I was also able to visit their home and see the situation for myself and discuss things with her parents.  They were so grateful and so happy about the opportunity.
God is good.  I love how he orchestrates events in our lives and all around us when we have no idea what is going on.  When we reach certain points we are able to look back and see some of what he was doing all along.  We are thankful for God providing this opportunity for Liz.  It is a great reward for her faithfulness.
Posted by Joe Peterson at 12:32 AM 1 comment: 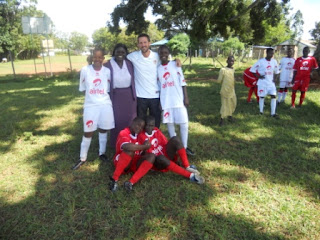 In January I had posted about taking three of our football club girls to Jera Secondary school. Since joining school, we haven't heard much from them. I have been communicating a lot with their coach and teacher who has been keeping me updated, but only talked to one of the girls one time. It is kind of unusual because when Leah was in primary school on Mfangano Island she would call me at least once a week (sometimes two or three times in a week) to let me know what was going on with her and how she was doing. Alicent had spent the last two years of primary school at a local private school and staying with one of our club officials so we saw her all the time and talked with her often. Usually when students (especially girls) go off to boarding secondary schools they get homesick and are borrowing the teachers phones to call home often, especially in the first year. I told others that either they are being held hostage and are never allowed to call home, or they are so busy, happy and content that they don't need to call home.

After two months, we decided we had to go and visit them, see their faces, check on how they are doing and spend a little time with them. On Wednesday we journeyed out to Siaya again with Elizabeth who is one of our players that has finished secondary school and Emily, the sister of Raisha. When they spotted us coming through the gate, they ran out to greet us with big smiles and even bigger hugs. They were happy to receive some gifts we brought them from visitors who had been with our primary girls the previous weekend and other basic necessities (toothbrushes, paste, shoe polish, tissue, pens and pencils, etc. We were able to watch their football practice and then spend some time with them.

The teachers spoke very highly about them in the classroom (their participation and work ethic) and on the field (their performance). Leah was even selected as their class leader. The girls were very happy. They are kept extremely busy and don't have much time to miss home. They wake up at 5:00 am for studying, then do some personal chores at 6:30, breakfast at 7:00 and then classes begin immediately after that. By 4:00 pm they finish their lessons and practice for two hours. After practice they bathe, eat dinner and head back to the classroom for personal studies for 2 1/2 hours before retiring to bed.

Their team has been successful, winning every match in their divisional qualifiers by big margins. They have their eyes set on a top three finish in the country this year and to represent Kenya in the East African Games in Burundi. I really respect the way the teachers at their school work together in the classroom and in games also. The teammates get along well and are like sister to each other (just like in our Suba Lakers Club). There were small complaints about food, but that is normal for secondary students. All in all, they are very happy and are doing well academically and athletically. I can't think of a better place for them to be.

Their coach is one of the few in the country that I have seen that has a good understanding of how to train and prepare a team for competition. Most schools, teams and clubs just roll a ball out and play 11 v. 11 for training, but Jera really teaches the intricacies of the game, how to pass and move and play good football.

Academically, the school is also performing. It is a mixed school (boys and girls) and it is both day and boarding. Most people in my area believe that to succeed in secondary school you must go to a boarding school and it most be purely boys or purely girls. But there are many like Jera and Kobala that do well. On the 2011 KCSE they had 4 A-, 5 B+, 9 B, 8 B- and 19 C+. That is 45 that qualified for University. And in 2010, the girls in the school outperformed the boys which is very rare in this culture and this country.

We left a little late, but very satisfied that our daughters were in good hands!
Posted by Joe Peterson at 12:17 AM No comments: 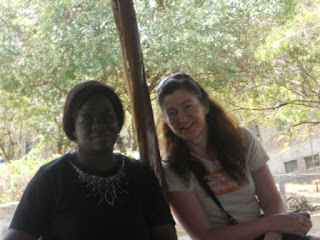 The Suba Lakers Football Club received some visitors from America on 2nd and 3rd of March.  They had come to spend time with our primary school girls, encouraging them spiritually, physically and academically.  They also brought some gifts to bless the girls with.  They brought basic personal items such as toothbrushes, toothpaste, school supplies, over the shoulder bags, socks and underwear.  They also brought some football equipment like cleats, cones, socks and shorts.
The girls learned much from them about how to seek God first and how to keep themselves pure until it is time for marriage.  They also shared about how to overcome difficult situations and about making good friends that will help you achieve your goals.  Decision making was also another topic that was discussed.  As business ladies they were also able to share about how to start a business and find ways to make a profit through it, and even how to start thinking about career choices at an early age.  It was a lot of wonderful information that will take time for the young ones to digest.
We hope that it will be a long time friendship between the visitors and the club, and that they will be coming back to share more very soon! 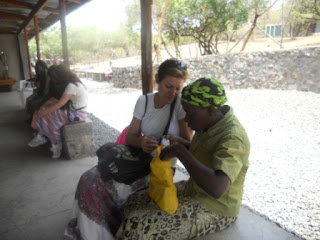 Posted by Joe Peterson at 9:14 AM No comments: