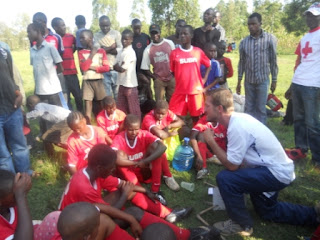 I love it when God opens up doors to share with people at the most unusual times.  During all of the chaos and drama during the Homa Bay Tournament when everyone was arguing and annoyed about the prizes being changed, tensions were so high.  We were asked to go to this park to wait for this important person who is campaigning to be the governor of our county.  He was coming to settle the disagreement and give us the way forward.  So there were about 20 team managers from all over the county from each of the sports (football, volleyball and netball) sitting under a tree waiting for this V.I.P.  Some of them I knew very well and some I was meeting for the first time.

The conversation began with our problems, but then quickly shifted to me and how long I had been in Kenya, what I had done in the U.S. before coming and why I came here which gave me a great opportunity to share how God had called me here.  Then it shifted to the fact that I was single and we began talking about marriage and finding the right person to marry.  That led to a heated discussion about true followers of Christ and religion vs. relationship.   It went on for at least 30-45 minutes.  People had really strong opinion, but listened closely to what I was saying.  Many asked questions that led us to look into the scripture to find out how God views marriage and discipleship.  Eventually the VIP arrived and we got down to the business that had brought us there, but I think there was another reason that God had brought us together that day.  In fact, I could see how God was working through all the problems that had gone on to open the eyes of a few more people.
Posted by Joe Peterson at 5:58 AM