On Monday, three of our girls opened a new chapter in their lives by joining secondary school.  Most of the students who sat their 8th Grade National Exams last November won’t join secondary school until early February, but after the results were released a couple weeks ago, Jera Secondary School in Siaya was quick to send them invitation letters and requested for them to come as soon as possible so that they could get adjusted academically before the others arrive and also to prepare for an upcoming football tournament.  Because of their football talent, they were asked to pay less than half of the fees for boarding school.  Through some well-wishers, the club was able to assist them financially to make their dream a reality.  We have prayed and fasted so much for their futures and this was an answer to that prayer.
Jera has won the Nyanza Secondary School Provencal Tournament in 11 of the last 14 years.  This past year they reached the National Semifinals before narrowly losing and missed out on qualifying for the East African games by just one goal.  Eleven of those players were in their first year of secondary school and have all returned.  They are hoping that through hard work and with the addition of some good players, they may be able to reach that next level.
All three of these girls joining Jera were founding members of the football club when they were tiny young girls in 5th and 6th grade.  It is so rewarding to see how they have grown physically, academically, socially and spiritually.  All of them are orphans that have faced so many challenges in their lives. 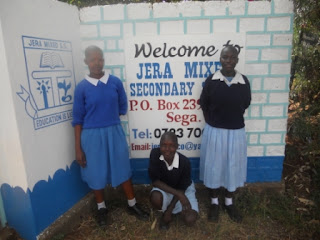 Alicent is a total orphan who was failing academically in her home school last year and the club was able to relocate her to Mbita town and the club chairman invited her to stay with his family while we helped her attend a private school where she improved by leaps and bounds.
Raisha is also an orphan who was having some difficulties and her grades had dropped dramatically three months before the exams when her guardian contacted us and together with the family and school we were able to counsel and advice her and saw her change in a short amount of time.
Leah has had so many obstacles that she has overcome since her father passed away shortly after her birth.  Because of issues at home on the island she ended up changing schools several times and hasn’t had a lot of stability.  Some of the places she stayed were not very safe for a young girl which affected her psychologically and physically her health was affected.  In fact, it reached a point a few months before her national exams that we had to help her transfer to Alicent’s school so that she could be safe and have a stable place to learn.  Now she will be the first one in her family to continue her education in secondary school.
One of our core objectives with the football club is to help keep girls in school and earn an education that can brighten their future.  Another one is to help give them exposure and open up opportunities.
We are so thankful for what God has done in their lives and look forward to what is in store for their future.  There are still six others that sat for their National Exams that we are praying for and asking God to open up a door, especially financially, to enable us to help them continue their education.
Posted by Joe Peterson at 10:08 AM