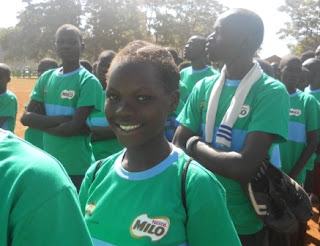 This week while we were playing in a tournament in Rongo, I received a call inviting some of our players to try out for the Kenya National Under 17 team.  It was very short notice, but we were able to put 5 of them in a bus to Nairobi with Jenny Cox within 24 hours of receiving the information.  After spending the night at Jenny's house, the girls (Alicent, Dorothy, Irine, Leah and Caren) were taken out to Matuu Girls Secondary School in Eastern Province.
There were over 80 of the best players from all over the country.  After two days of trials, they selected 30 to remain in the camp and sent home the other 50.  We were blessed that one of our players was selected.  Irine Achieng (former CGA student currently learning at Moi Girls Secondary School in Sindo) impressed the coaches with her strong left foot crosses and shots.  She will remain there at Matuu to attend classes for a few weeks and train with the team as they prepare for their clash with Nigeria on 21st January in Kenya with the return leg scheduled for two weeks later.  These matches are part of the qualification process for the World Cup to be held in September - October this year. 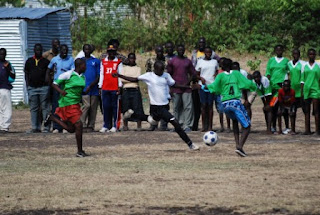 The other girls returned home today thankful for the opportunity to travel to a new place and compete against some of the best players in the country.
Posted by Joe Peterson at 9:21 AM