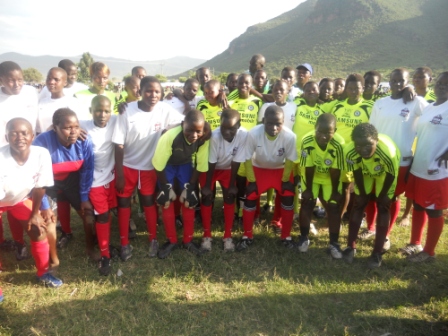 The Suba Council of Elders is sponsoring a tournament at Sindo for the Greater Suba/Mbita.  Teams are competing in Men's and Women's Football, Volleyball and Netball from Mfangano, Rusinga, Gembe, Kaksingri and Gwassi.

Instead of taking the Suba Lakers as a team, we allowed our girls to play for their home regions.  Six of them are playing for Mfangano Island, two others are playing for Kaksingri and our Gembe team is made of entirely of Suba Lakers from around Mbita (some in primary and some in secondary)

In Girls football, the Gembe region (our team) defeated Mfangano 3-2.  Gembe started strong in the first half on two goals from Irine Achieng.  The first one was on a penalty kick and the second one on a good shot from just inside the box.  At the beginning of the second half, it looked like Gembe would cruise to an easy victory when Sharon Bismark scored to put them up by three goals, but Mfangano would not give up that easy as Leah Ongojo (another Suba Laker) fought hard to pick up two goals to bring them within one.  Though it was too little, too late and the game ended 3-2.  Mfangano came back in their 2nd game defeating Gwassi by a score of 1-0 on a goal by Dorothy Adhiambo (Suba Laker).
In the final game of the day, Gembe scored an early goal from the smallest player on the field, Teresa Atieno (6th grader), in the 7th minute after a nice pass from Primerose Achieng.  Gembe created numerous chances, but couldn't add to their lead and the game finished with Gembe defeating Gwassi 1-0.  Primerose hasn't played much football over the past couple of years because she is on a basketball scholarship at one of the top secondary schools in Kenya.  So most of her time is spent in basketball.  She is only home for about a week, but was ready to come and play football with us.  It is great to have her back with the team.
In the semifinals on Thursday, Gembe will face Gwassi while Mfangano will take on Kaksingre.
Posted by Joe Peterson at 9:17 AM