In the Ladies semifinals for the Suba Council of Elders Tournament in Sindo, Mfangano defeated Kaksingre 1-0 on a goal that came off of a corner kick from Leah Ongojo.  In the other semifinal Gembe defeated Gwassi 5-0.  After missing numerous 1st half opportunities to put the ball in the back of the net, Gembe capitalized in the 2nd half with 5 goals.  One each from Syprose Akoth, Alicent Awuor and Irine Achieng and 2 goals from Sharon Bismark.
In the finals, Gembe scored a classic goal late in the second half after a corner kick bounced around in the box and Alicent Awuor pounced on it and sent a laser past the flat-footed goalkeeper.  It was the just reward for their domination of the ball possession throughout the game.  The winners received The Senior Chief Damianus Ajwang Memorial Trophy donated by Roseline A. Onyuka.  Unfortunately the set of uniforms that was supposed to go to the winners was given to the boys runners up instead.  Some of the invited guests contributed some cash awards for the young ladies. 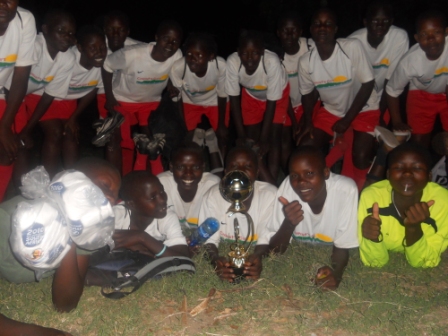 In the entire tournament, every goal that was scored was by a Suba Laker.  Having our players spread out and playing for their home regions led to a very competitive tournament.
Posted by Joe Peterson at 11:46 AM