The Suba Lakers returned from Kitale on December 13th.  It was a great experience spending 4 days in a new place, meeting new people, hearing new ideas and playing against strong competition.  The players liked the place very much, except for the cold weather.  For young girls that have grown up at sea level on the equator where the temperature is consistent year round, the high elevation "cold" weather was a bit of a shock to their system.  It was hot during the day, but cooled down to around 50 degrees F at night.

The first two mornings the players participated in group sessions with the girls from other teams where they discussed how to keep their dreams alive.  They shared challenges they face and how to overcome them so they can build a better future.  During the discussion times and even during the nights, the girls formed strong bonds with the other teams from various parts of the country that were there.

On the field the team couldn't take advantage of their leads to finish off the games.  In the first match we opened with a goal from Dorothy Adhiambo in the first ten minutes and controlled possession against SEP from Oyugis.  Unfortunately we had a let down in the 2nd half and allowed them to equalize, finishing in a 1-1 draw.  On the 2nd day we played the hosts TYSA, a very strong team.  Again we jumped out to a 1-0 lead on a goal from Irine Achieng.  Within a minute TYSA scored to keep the game even.  The 2nd half was back and forth until TYSA scored a second goal to win 2-1.  In the last group game we domintated against KYFA, winning 2-0 on goals from Dorothy Adhiambo and Irine Achieng.  Unfortunately we finished 1 point behind the other two teams and missed out on playing in the finals. 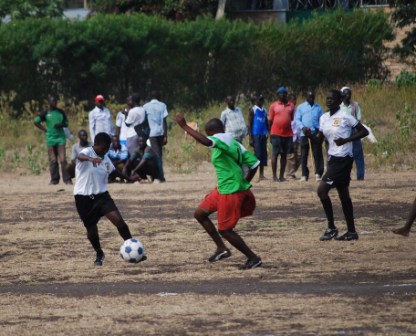 We were thankful for the opportunity to travel to Kitale and make new friends while being exposed to a new area of the country.
Posted by Joe Peterson at 1:15 AM