In Action at the Nyanza West Branch Chairman's Cup in Rongo the Suba Lakers Girls reached the semifinals by winning all three preliminary matches The first one was a 7 to 0 victory against Migori Women on four goals from Dorothy Adhiambo (hat trick in the first half), and goals from Irine Achieng, Caren Akeyo and Leah Ongojo.  That was followed by a 2-0 win over Kuria Umoja with goals from Achieng and Ongojo.  In the final preliminary immediately before beginning the semifinal, the Suba Lakers defeated Rawofo 1-0 on a goal from Sharon Bismark after a beautiful cross from Liz Wanjere.
The Rongo women's team consisted of several players from Mathare United and the coast.  They also reached the semifinals in impressive fashion by whipping Kuria United 2-0 and Rapedhi 5-0.  In one semifinal Rongo defeated Rawofo from Rangwe 5-0.  In the other semifinal the Suba Lakers struggled to finally get a goal in the closing minutes when Sharon Bismark tapped in a rebound that just barely crossed the goal line before the keeper picked it up.  They totally controlled the game and had so many chances, including a 2nd half penalty kick.  Every ball was just barely missing the goal or was collected by the goalkeeper and it looked like it would end in a draw until Bismark's hard work finally bore fruits in the battle around the goal.
Playing in their third consecutive match in three different locations, the Lakers battled hard in the first half of the Finals against Rongo and it remained scoreless until injury time when the much more experienced Rongo team fired a hard shot that the Lakers goal keeper wasn't able to handle properly.  In the 2nd half Rongo added several more to pull away in impressive fashion 5-0. 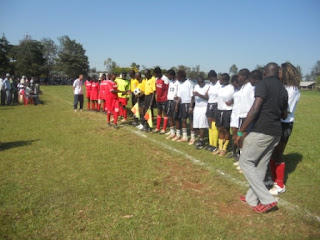 For winning the tournament, Rongo was awarded with sh, 10,000 and the opportunity to represent Nyanza West in the Regional league set to begin in 2012.  The Suba Lakers received sh. 7,000 for finishing in 2nd place and Kuria United received sh. 3,000.  Each of the 8 participating teams was also promised a new set of uniforms in January from the Branch Chairman, Mr. Phillip Owuoti.
Posted by Joe Peterson at 11:22 AM