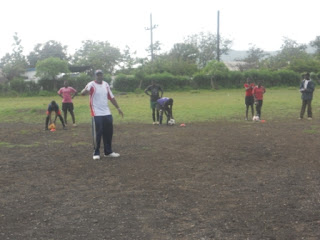 This week we hosted internationally renowned coach Bob Oyugi in Mbita.  Bob has been one of the main men in Kenyan football for the last 25 years.  He has spent time coaching some of the biggest clubs and national teams and has travelled to every continent of the world attending coaches trainings and conducting clinics and camps.  He has been certified as an trainer of coaches in several countries and is also a representative of the National teams, National Youth Talent Academy and UNICEF.  Even though he has been to every continent and the U.S. over 20 times, he has never been to Mbita before this week.
Bob worked with 60 of our players during his three days in Mbita and at the same time conducted a coaches training for over 25 local coaches from all over the sub-branch.  He was also assessing our players to see if some of them could be invited to the Under 17 trials in Nairobi next month.  It didn't take him long to see that we have some of the best young girls in the country.  He left Mbita very impressed at what he saw.

It was a very successful week as the club was able to help the players and all of these local coaches with this opportunity.  We hope that as an ambassador of Kenyan football, Bob will be going back to Nairobi with a good report of what we are doing in Mbita so that other partners may be able to join us in developing girls youth football in the country. 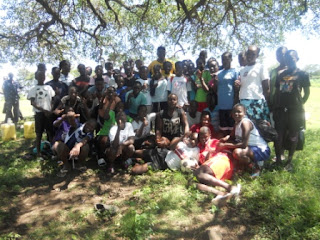