The Other Side of Kenya

Last week I was able to travel with the Nyanza Primary School Provencal team to the other side of Kenya. Six of our Suba Lakers were among the 20 girls from our province that were selected to Nationals in Mombasa. They trained for one week in Kisumu before embarking on the long journey across country. The Nyanza contingent included boys and girls football, handball, volleyball, netball and gymnastics along with numerous officials and coaches. In all, we filled up three big school buses. With a few hitches along the way it took us around 24 hours to reach our destination. The players didn't seem to mind as they enjoyed getting to see many parts of their own country that they had never laid their eyes upon before. 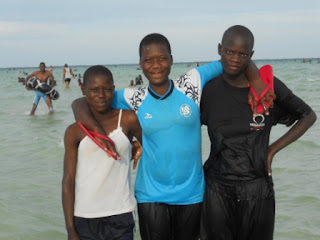 The day before we began our competition, we were able to take them to a public beach so that they could go swimming in the ocean. After alighting the bus they were met by many hawkers selling everything from food to souveneirs. Others were renting out intertubes, camel rides, selling photos and about anything else possible to make a little money. The students only focus was on swimming, and maybe a few pictures of themselves to prove to others they were really there. Most of the Nyanza people have grown up around the lake so the saltiness of the ocean really shocked them, but they soon got used to it and played for hours. It was low tide so it was like the world's biggest kiddy pool because the water was only coming up to their knees or waist and it went on forever. 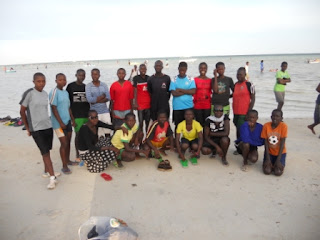 Needless to say, it took some time to round up all the kids amongst the throngs of people when it was time to go, but eventually we succeeded. Thoroughly exhausted, the kids got back on the bus with many stories to tell all of their friends and family when they reach home.
Posted by Joe Peterson at 11:10 PM