A Comeback for the Ages

The National Primary School Ball-games in Mombasa began on Sunday morning with the preliminary rounds. In the previous ten years our girls football team had never gone very far maybe because of poor selection of players or coaching or lack of teamwork and cooperation among the players from different tribes in our province. Last year was the breakthrough year. Five of our Suba Lakers helped Nyanza reach the finals where we narrowly lost in extra time on a controversial goal to the defending champs (Western). This year with six Suba Lakers, we wanted to go one step further and win the championship.


In the preliminaries we struggled a little bit trying to find the right combinations and put the right players in the best positions. Fortunately, we managed to emerge #2 in our pool. Unfortunately, we were matched up with the defending champs again in the semifinals. The girls were excited at the opportunity to seek revenge for last year’s final. We made a few changes to the line-up and dominated the game from the very beginning, playing much better than we had in the preliminaries. We missed several chances in the first half to move ahead, but were confident that the goals would come. Shortly after halftime we committed a foul inside our penalty box and they converted the penalty kick. A few minutes later they added a second goal and we found ourselves down 2-0 with ten minutes to play in a match we had thoroughly controlled. 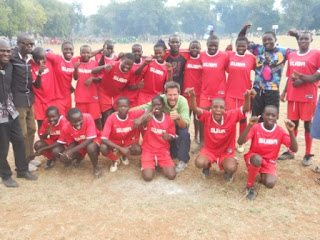 It was do or die and we had nothing to lose so we kept shouting and encouraging the girls as much as we could and thankfully they didn’t lose hope. They also believed and kept fighting hard. Within a short time we were awarded a penalty on a handball and we converted to draw within one goal. In the dying minutes Rachel Ongatch was able to collect a rebound from a corner kick and stick it into the upper right corner of the goal to equalize and send all of the Nyanza fans into a frenzy. Just like last year’s championship game against Western we were again going into extra time. This time there was no controversial goal. In fact we again controlled the match though we missed two great chances when the striker was alone with the goalkeeper. The extra time ended in a draw and we prepared for penalty kicks.
The first two kickers for each team converted their penalties. We were given a ray of hope when our goal keeper Winnie Adhiambo (CGA and Suba Lakers) blocked their third attempt. Unfortunately our third kicker also shot over the goal post. Then, one after another, every kicker on both teams kept scoring until we reached the 9thkicker. Winnie again blocked their attempt, but this time Lavenda Achieng (Suba Lakers) stepped up to score the winning goal. The Nyanza contingent stormed the field, lifting several players on their shoulders to celebrate the miraculous comeback. The dancing went on for several minutes, followed by some singing and chanting. It was one of the best games I have ever been involved with here in Kenya.
The following day, the Finals were anticlimactic. The host team, Coast Province, brought in several non-Primary school students from a local club and ended up defeating us. We again fell behind by two goals (both in the first half) when they were playing with the wind. We tried to mount another comeback in the 2nd half and even scored a goal, but the referee disallowed it for no apparent reason.
In the end, we finished 2nd in the country, but the joy of exacting revenge and dethroning the two-time defending champs in the semifinals will linger in our memories for a long time!
Posted by Joe Peterson at 11:34 PM