Many of the Suba Lakers participated in the primary schools District Tournament at Mbita High School on 29th and 30th March.  Fourteen of them played for Mbita West, Four for Mfanagano and Four for Rusinga.  Mbita West managed to capture the championship with a penalty shootout win over Rusinga Island.  The talk all over the field was about the littlest player on the field, Brenda June.  She is a 12 year old from our club who was in total control of the midfield, going around, through and by every opponent who tried to stop her.  Her skills and aggressiveness stood out among the giants.  People had never seen such a little girl play football like that before. 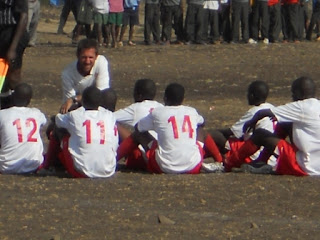 Out of the 15 players selected from the District to play in the Regional Finals, 13 were Suba Lakers.  The team is training over the weekend and leaving for Homa Bay on Monday 2nd April for the two day tournament where they will compete against 5 other combined teams from all over the county.  Mbita District (our team) has won the Regional every year since it began three years ago so there are high expectations to continue that trend in 2012.
From the Regionals, they will again select the best players to move on to Provencals in Rongo and again there they will select the best players to move on to Nationals which will be held in Mombasa on the coast of Kenya this year.  The past five years we have always had around 4-5 players from our club selected to participate in Nationals and we hope with success that we will again get that opportunity.  Last year five Suba Lakers helped the Nyanza Province team reach the National Finals where they lost 1-0 to the defending champs.  Four of those five Lakers have now moved on to secondary school so it is time for the younger ones to step up.
Posted by Joe Peterson at 12:24 PM