The last part of March and first part of April in Kenya are filled with primary school sports, including football, volleyball, netball (twisted version of basketball), handball and gymnastics . It starts at the school level competing against the other local schools. After that competition, they choose the best players to form a new team and move on to the next level. They continue to have tournaments where they select the best players who continue to move on through the different levels, including school, base, zone, division, district, regional, provencial and finally national. So it is about 8 different levels they pass through until they get the best players in the country to compete at Nationals.

I have been coaching the different teams through each level for girls football. As we move to the different levels we compete against other members from our Suba Lakers Girls Football club. After competing against each other, then we join together to compete at the next level. The players from CGA and myself coaching them have managed to emerge victorious at each of those levels.

The latest success came as our Mbita District team destroyed the competition at Regionals in Ndhiwa, winning each match by a large margin. After the success there, twelve of our girls were selected to represent the region at Provencials. There were only two players selected from other districts. So after training for three days we travelled to Kisii with the other sports teams from our region to take on the other regions in the province. The Mbita girls (all Suba Lakers) once again shined brightly, drawing the praise of the fans, officials and other teams.

With four goals coming from Leah Ongojo and two from Caren Akeyo, the team won both preliminary games by scores of 3-1. In the semifinals we met a very strong Kisii team. Towards the end of the first half, Alicent Awuor crossed the ball to Sharon Akinyi who struck the ball into the top left corner to put us ahead 1-0. Defender Peninah Akoth made a great goalline save and we held on in the second half for a hard fought 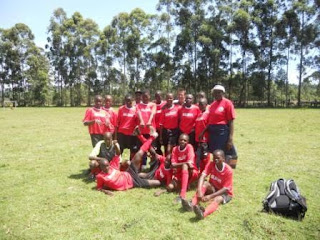 victory. In the finals Lucia Awino scored in the first few minutes of the game to put us ahead and we never looked back. Defender Lydia Awino kept the other team's top scorer in check the entire game and goalkeeper Winny Adhiambo made some great saves to preserve the win. The first time our county or district has won the Provencial title. We have reached the finals for the past three years, but each time lost narrowly.

For their success, five of our players were selected for Nationals, including Alicent Awuor, Raisha Achilla, Lavenda Achieng, Leah Ongojo and Lydia Awino. We are very proud of them. Their hard work within the Suba Lakers Club has paid off. People all over the country are recognizing their outstanding talent and ability. They will get a chance to compete and train with the best players in the province and against the best in the country next week in Meru. They will also receive National Certificates that will greatly benefit them in getting into colleges and even getting jobs in the future..
Posted by Joe Peterson at 1:45 PM