I have been coaching our school team and club team and also teams from our area all the way up to the Provencial level for the past 4 years, but this is the first year I was asked to assist the Provencial Team at the National Level. Since five of the girls from our club were selected for the team and because we were closing the school term, it seemed like a great idea.

So, after two days at home, I was back on the road headed to Nyamira (Kisii) to help with training for a couple of days before leaving for the tournament. It was a little akward because I didn't really know the head coach very well and my few interactions with him had not been very pleasant. I was a little worried and wanted to have a very humble approach. After I arrived, we had one practice and then he informed me he was going home to see his family for a day and I was in charge of the team. I hadn't selected the players and didn't know any of them except for the five. It was not easy, but turned out ok. The coach was very receptive to my help and we made a good partnership and friendship.

After training camp ended, we boarded the bus at midnight, ready for the 12 hour journey across the country to Meru, at the base of Mount Kenya.

In the previous ten years, Nyanz 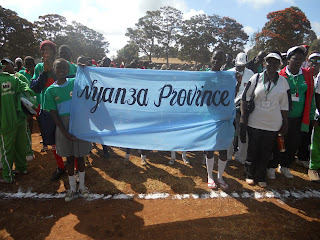 a Province Girls Football had never even reached the semifinal stage against the other seven provinces. When you think of all the excellent girls in our area, that is difficult history to believe. I think in the past a lot of the problems were because of poor player selection and also poor fielding (not picking the right players and putting them in the right positions). I learned that another problem in the past was tribalism. Our province mainly consists of Kisii and Luo. Though the tribes normally get along well, sometimes in younger kids they find it hard to interact with each other, especially when they are so used to speaking their tribal languages. It leads to mistrust and quarrells and other problems. And honestly, sometimes girls can just be a little catty.

In my opinion this the player selection still wasn't very good this time; several good players were left behind while some others were taken that didn't d 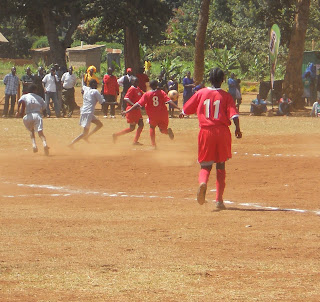 eserve it. This made fielding difficult also because we didn't have anyone to play certain positions or any good back-ups at other positions. Some players had to play out of position because of the lack of depth. In the preliminary stages we also had some conflict and some selfishness by some of the players who would only pass to certain players, but the teamwork continued to improve as the time went along.

We won our first match 2-0 and then drew the next two matches 0-0 and again 0-0 to finish as the runners-up in our pool. We marched into the semifinals and soundly beat Coast Province 2-0 with two second half goals. Our whole team with all of our fans marched up the street to the main venue singing and chanting. Once we reached the stage, they be 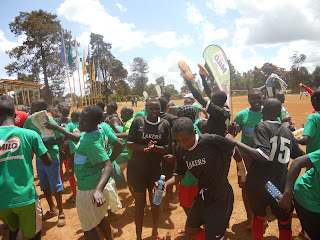 gan playing a song familiar to our region and we danced for quite a while, savoring the big moment.

That win set up a rematch in the National Finals with the defending champs, Western Province (our neighbors). We had drew with them in the last preliminary game the previous day.

As expected, it was a very intense, hard fought match. They had speed and power. We had skill. Our goalkeeper made a few good saves to preserve our defense's scoreless streak in the tournament. We also had a few chances, especially on two free kicks just outside the box, but neither team scored in regulation and we went into extra time. Unfortunately, our goal keeper bobbled a long shot that fell down in front of her. There was some confusion as the Western fans started shouting behind the goal, and before we knew it, the ref signalled that the ball had crossed the line and called it a goal. Since he was standing at halfway across the field when the play happened and with our goalkeeper in perfect position behind the ball, I still find it very hard to believe it was a goal, but the referee's decision is final. So the game ended like that. Everyone was heartbroken. Things didn't improve either in the boys final when our boys lost by a goal also. 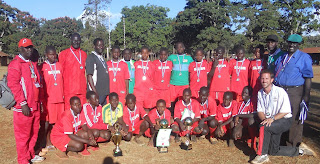 The girls were much happier when they received their silver medals and a big trophy to bring back to Nyanza, though it is painful being that close and coming up short. Considering the history of girls football in the past ten years, 2nd place is a big accomplishment. It was a great experience for me and the entire team.
Posted by Joe Peterson at 1:44 PM