In our football club last year we had seven girls who were in 8th grade and sat their National Exams in November. Four of them passed and three of them failed. The ones that passed, didn't just pass, but truly excelled. Adah was the 7th best girl out of thousands in the district, Linet was the 16th best girl in the district and Sharon was the top girl at her school. Phenny also passed. 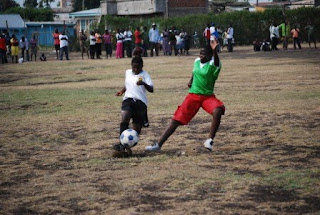 But the problem is that the ones who failed, really failed! I have been troubled for the past few weeks since the results came out. All three of them are already 17 years old, so repeating 8th grade didn't seem like a very good idea. They all have widowed mothers who struggle just to feed their families on a daily basis. God provided a way this week. The coach from Kisii United called. His club finished 2nd last year in the Kenyan Women's Premier League. They have a great club and are doing so well. Henry has also been appointed as the coach for the Kenyan Women's Under 23 National Team. He was asking about some of our players, including some of these girls. He said that even with their low scores, he could find a day school in Kisii where they could learn. His club will pay for all the school fees and the girls will stay in the hostel with some of the other team members and train with them on a regular basis.
Praise God!

Their mothers came today and four of our club officials shared this idea with them. They were estatic that their girls could continue their education and that someone was willing to pay for it because of their football talents.
When all of us though there was no hope, God opened the doors!