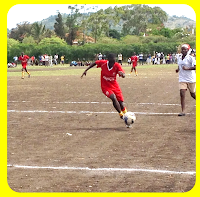 This past weekend the Suba Laker Junior Girls won the CRADLE Tournament in Mbita town.  CRADLE is an organization dedicated to children’s rights.  Each year they host a football tournament in Mbita which is largely geared towards boys.  This year they had over 30 boys teams participate in the 5-day tournament.  Unfortunately, the girls were just an afterthought.  It took a lot of convincing to get them to permit the girls to play on the last day.  With only one day notice the CRADLE organizers were able to find 4 local teams to play in a mini tournament.

In our first match, we played against some older ladies called Mbita Lakeside.  It didn’t take long for us to gain control of the match as Primerose Achieng dribbled through 2 defenders and scored a classic goal in the opening minutes.  A few minutes later, Lucia Awino added to the total with a nice free kick from just outside the box.  In the 12th minute Lencer Adoyo kicked a rocket from 25 feet that landed in the top right corner of the goal.  Shortly thereafter Lencer provided a great cross to Mourine Owiti who closed out the first half with a goal. 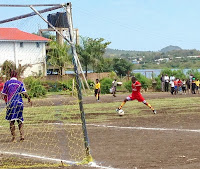 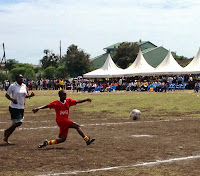 Already leading by 4 goals, the Lakers kept the pressure on in the 2nd half with a goal in the 6th minute  by Brenda June.  In the 9th minute Lucia scored her 2nd goal on another free kick.  In the 12th minute Lucia completed her hat-trick with a penalty shot.  In the 15th minute June added her 2nd goal with a beautiful dribbling exhibition and finish.  The final goal of the match was scored by striker Phylice Akoth who used her speed to race past the defense and place a shot beyond the reach of the hapless goalkeeper.

The match ended 9-0 and the hometown crowd couldn’t stop talking about it.  They didn’t know a team of girls could score so many goals in such a short match.  The Suba Lakers don’t get many opportunities to play in front of their hometown fans especially with such a big crowd, so it was fun for them to enjoy the moment.

The finals didn’t go quite as easily.  Facing a determined Kamgere team from Rusinga Island, the Lakers thought they would have another simple win, but it ended up being much more difficult.  They controlled the ball and created chances, but couldn’t make the final play to score.  As the game wore on, the players got more frustrated and started pressing.  Even the fans were expecting a lopsided victory and were getting restless.  No team could break the deadlock and the match ended 0-0.  In the post-match penalty shootout, all of the five Suba Lakers scored their penalty kick and goalkeeper Lillian Awuor blocked the last two shots to seal the victory and give the Lakers the Championship. 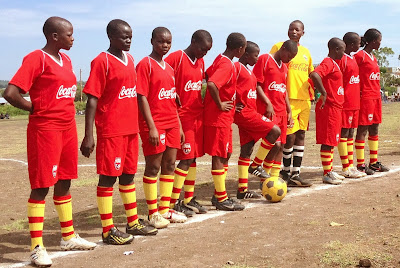 The theme of the tournament was “Kicking Child Abuse out of Kenya”.  The main aim was to use sports to attract many people, especially youth, to sensitize them on their rights and what they should do if their rights are abused. 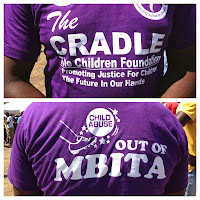 As for the awards for the top teams, the organization was prepared to give out many prizes to the boys teams; including trophies, uniforms, balls and money.  Since they hadn’t planned for a girls match, they didn’t bring awards or prizes for the girls.  We were awarded with 1 ball; only.  Yet, we’re grateful for the 1 ball as we have a great need of quality, well-made balls.

The Mbita Member of Parliament Millie Odhiambo graced the occasion and during her speech spoke that we must all strive for gender equality.  She directly stated to the CRADLE organizers that whatever awards and prizes were given to the boys, should also be given to the girls.  Following her speech, the girls were promised a trophy, a cash prize, t-shirts, and uniforms.  We’re extremely grateful to have a local MP who is concerned about these equalities!  We are hoping the organization will follow through so that the girls can receive what they earned, and more importantly, what they deserve as equals with the boys!
Posted by Daneen at 7:19 AM