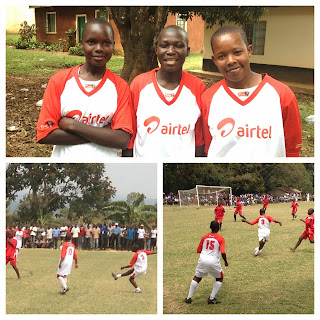 This past weekend, three Suba Lakers helped lead their secondary school to the Regional Championship!  Alicent Awuor, Raisha Achieng and Leah Ongojo were key members of the best secondary school team in the region this year.


In their first year of secondary school at Jera in 2012, all three players contributed to a team that reached the Regional Finals.  In last year’s final they pulled ahead 2-0 in the 2nd half on a goal from Alicent, but they couldn’t hang on in the dying moments as they allowed two goals and eventually lost on post-match penalty kicks to a strong Koballa Secondary School team that also included a Suba Laker player.  They were heart-broken to not reach their goal of making Nationals in Mombasa.


This year, they returned every one of their key players, except for one who graduated last year.  They have been determined to make amends for the gut-wrenching end to last season.  They have trained hard from the first day of school in January and played a very challenging pre-season schedule to prepare them.  With a glimmer in their eyes, they romped through Zonal, District and County tournaments beating teams by an average of 5-6 goals a game, and sometimes beating teams by more than 10 goals!


In the Regional Tournament they won their first match 12-0 and then won their 2nd preliminary match against one of the tournament favorites 4-0.  In the quarter-finals they sent Moi Girls Secondary School Sindo home with a 2-0 loss.


The semi-finals saw a rematch of last year’s championship game between Kobala and Jera.  Last year’s loss was still fresh in the Jera players’ minds.  Unfortunately, 4 minutes into the game, Alicent Awuor injured her knee and was carried off the field.  Jera quickly regrouped and scored a few minutes later on a long free kick, and before anyone knew what happened Kobala drew even with a perfectly timed goal.  Jera though proved too strong over the long haul and ended up with a convincing 4-1 victory to set up another finals appearance. 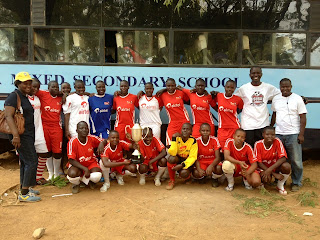 The following day they had a relatively easy time in the Finals putting away Nyakach 2-0 to win the championship and book their tickets to the National Finals in Embu in early August.  Jera has dominated the Lake Region, winning the Regional Girls Football Title 13 of the last 17 years.


Before her injury, Alicent was playing very well upfront scoring many goals and creating numerous chances for her teammates.  We hope she will be healthy enough to play at Nationals in a couple weeks.  As the stopper, Leah Ongojo anchored a defense that only allowed 1 goal in five matches.  Raisha provided a strong presence as a defensive mid-fielder, supplying balls up front to Jera’s talented attackers.
Besides these three players, there were 7 other Suba Lakers playing for different teams, including 4  whose teams finished in the top 4 in the Region.


Jera has a strong and experienced team that will challenge for the National Trophy.  The top three teams at Nationals will get the opportunity to represent Kenya in the East African games in Uganda next month.
Posted by Joe Peterson at 8:39 AM