Despite tough circumstances, Lakers finish 2nd in the Province!

This weekend the Suba Lakers Under 14 year olds participated in the Nyanza Province Coca Cola Finals.  They had qualified for the Provincal Finals by winning their branch during league games that took place during May and June.  The first and second place teams from each branch were invited for the Provencial Finals.  Only one champion from the province would advance to the National Finals in Nairobi later this month. 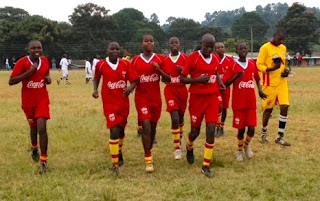 In Pool A, the Suba Lakers handled Rachuonyo in the first match 2-0. They scored in the first five minutes on a penalty kick by Lencer Adoyo and then added to their total 10 minutes into the 2nd half on a goal keeper deflection that Phylice Akoth muscled back into the net. In their 2nd match the Suba Lakers took care of Siaya Township 1-0 with Winnie Akinyi scoring a goal late in the first half to put them in front to stay.

Pool B had many problems because the Kisumu Queens were held up by police for overloading their vehicle and didn't arrive at the field until 3:00 pm. Mwangaza FC and Nyamira Girls drew in the first match 1-1, but Kisumu Queens were able to do their business upon arrival dispatching both teams by a score of 1-0 in shortened matches.

The final pitted the two undefeated teams (Suba Lakers and Kisumu Queens) against each other with the winning team slotting their place at the Coca Cola Nationals. The big city girls versus their rural counterparts.  The match started after 6:00 pm and, because of time, the teams only played two 7 minute halves to decide the champion; a 14 minute match. In the first half, Kisumu Queens got a breakaway opportunity. With the linesman raising his flag to signal offsides, the center referee completely ignored him and allowed the play to continue as the player dribbled into the box and placed it beyond the outstretched arms of the goalkeeper. With much confusion and controversey around the field, and even a consultative meeting between the center referee and the linesman, the goal was allowed to stand. The Lakers fought hard to create chances, but with limited time weren't able to equalize.

Kisumu Queens is a young talented team that should do well at Nationals.

It was an unfortunate ending to an otherwise successful day for the Lakers.  Both the boys and girls finals to decide which teams proceed to Nairobi were played after 6:00 pm with low visibility and the sunset interfering with the vision of one team and especially their goalkeeper. And they only played for two 7 minute halves!!  Have you ever heard of a 14 minute football match?  There were also issues with age vetting in the morning, and issues with receiving the promised transportation costs reimbursment. 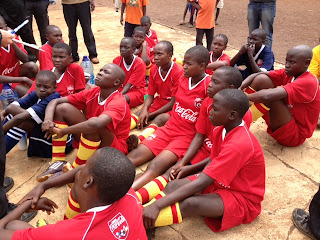 Coca Cola is doing a good thing, giving the young kids a chance to play and develop their talents.    The younger players don't get that opportunity very much in this country becuase most of the focus is on the older boys and young men, so it is a joy to watch young boys and girls competing in a competitive of environment. And it proves that there are many talented young players in this country!

The positive side is that the girls came in 2nd place in the entire province.  They were encouraged to hold their head high, knowing they played their best, and were fair and honest.  God has bigger plans for these girls in the future to honor their persistence, as well as honesty and good character.  We are grateful for the opportunity for these younger girls to develop their talents and learn some good life lessons in the process.
Posted by Joe Peterson at 5:20 AM