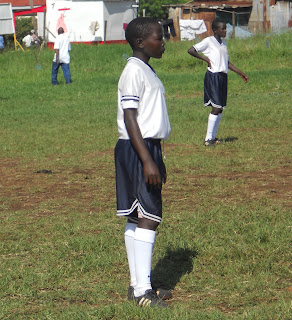 Most people didn't have a lot of hope going into the match against the league leading Kakamega Muslims team.  Last time the two teams met, the Suba Lakers suffered their biggest defeat of the year with a 3-0 loss, and that was with all of our best players.  This time around, none of the secondary school students were available because of exams going on.  Many of our younger girls had not even played a game in the Division 1 league season and it is not easy for 5th, 6th and 7th graders competing against much older women.

The game started amidst a mid-day downpour that soaked the players and also the field for about 10 minutes.  Because of the poor condition of the field, Kakamega scored a sloppy goal in the first half when 2 Suba Lakers slipped and fell down and the goal keeper couldn't get solid enough footing to collect the weak shot that dribbled in.  The young Suba Lakers didn't back down against the 1st place team and were able to battle back in the second half to equalize after Lenser Adoyo was taken down in the box.  The resulting penalty kick produced a goal for Irine Achieng.  Most of the game took place in the center of the field with the teams battling equalling.  The Suba Lakers tiny midfield duo of Theresa Atieno and Brenda June were outstanding at controlling the ball and distributing it to the forward players.  They were about 2 heads shorter than the opponent, but they set the tone with their aggressiveness.  Lavenda Achieng was equally formidable in the defense, with some support from Eunice Anyango, Mourine Owiti and Nancy Okeyo.  6th Grade goalkeeper Lillian Awuor continued her stellar play over the past month by blocking many shots. 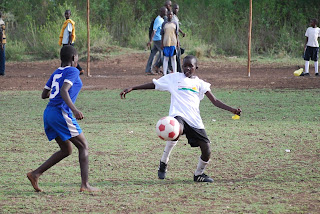 Unfortunately, in the closing ten minutes a Kakamega player dribbled it down the wing and around several defenders and put in a beautiful cross that was headed into the back of the net, leaving the goalkeeper with no chance of stopping it.  It ended 2-1 in favor of Kakamega.

After the match, when the opposing coach heard that his team had just played a team made up entirely of primary school girls, he was stunned.

It looks like the Suba Lakers have a bright future!
Posted by Joe Peterson at 4:40 PM