2nd Half Kicks off 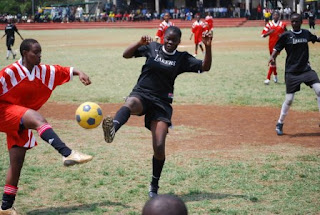 The Suba Lakers opened the 2nd leg of their Nationwide Division I league this past weekend by taking the longest trip of the season.  They travelled on Saturday to Naivasha to take on the Oserian Queens.  In the very first game of the inaugural season the Queens defeated the Lakers in Mbita 2-1 and that  was the difference in the standings between the two teams with the Queens holding a 3 point advantage because of that win.

Several of the Suba Laker high school players were not available this time around because of committments in their schools and so their travelling squad consisted of half primary school girls and half secondary school girls.  The inexperience showed through in a 2-0 loss to the more mature and seasoned Oserian Queen players, but the standout performance was delivered by Suba Laker goal keeper Lillian Awuor who saved close to 15 shots on goal, inlcuding some acrobatic efforts that kept the game close.  The 6th grader even caught the eyes of the opposing team.

The Lakers had some vehicle problems on the way home but eventually reached in the night and are now busy preparing for a home match this coming weekend.
Posted by Joe Peterson at 10:30 AM