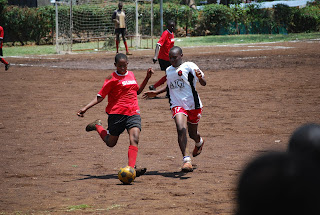 The Suba Lakers hosted arch rivals Kisumu Leeds United in the last match of the 1st leg of the FKF Division I league.  Both teams have struggled a little bit in the first leg and were battling to stay in the middle of the pack halfway through the season.

There was a big crowd at Mbita High School to watch the home team play, and they stayed noisy for the entire 90 minutes.  The Lakers started well and created many chances early on, playing with good ball-control and taking charge of the match, but never finished.  Early in the 2nd half Dorothy Adhiambo created a chance resulting in a handball from Leeds.  Raisha Achieng converted the penalty kick to give the Lakers a 1-0 lead.

After Kisumu Leeds equalized, the Lakers slowly regained control and pulled out the victory with a low line drive shot by Alicent Awuor.  The 2-1 victory was probably the best performance of the season from the Lakers up to this point as they demonstrated great ball possession and played like seasoned veterans.

With the win, the Lakers now have 7 points on the season with 2 wins, 1 draw and 3 losses.  They are sitting in 5th place out of 7 teams at the halfway point, but are only 2 points out of third place.

After the game, many of them returned to their high schools as we received word that the public school teacher strike had finally been called off, after 4 weeks.  When the 2nd leg of the season cranks up some of the high school girls will be able to continue playing while others will have to be replaced by some of our primary school players.
Posted by Joe Peterson at 12:29 PM