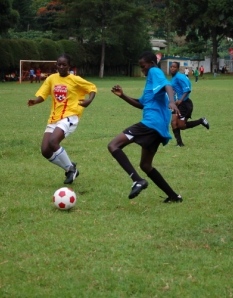 The Division One season continued this past weekend with a home match against Nyuki Starlets from Western Province.  In the first half 6th grader Lencer Adoyo scored the first goal for the Lakers, who still found themselves trailing at half-time 2-1.  In the second half Caren Akeyo scored a great header to even up the score and the game ended in a 2-2 draw.

The secondary girls will be returning to their boarding schools this week and the primary school girls will also be starting their last term of the year.  After a week off, the season will resume on September 15th. So far the Lakers have won 1, lost 2 and drawn 1.