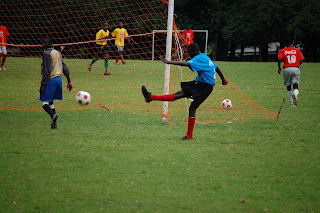 The Suba Lakers continued their Division 1 Season with a barren draw against arch rivals Victoria.  Victoria is sitting in 4th place in the league, one position ahead of the Suba Lakers.  In the earlier match in Kendu Bay back in September, Victoria emerged triumphant with a 2-0 victory.

This time around both teams battled hard in an evenly matched contest.  The Lakers were playing with 9 of their primary school players against the more experienced team.  The outstanding performers on the day were once again Goalkeeper Lillian Awuor and defender Lavenda Achieng.

The Suba Lakers will finish off their season in the inaugural FKF Ladies Division 1 League next weekend with away matches at Nyuki Starlets and Kisumu Leeds.
Posted by Joe Peterson at 11:10 PM