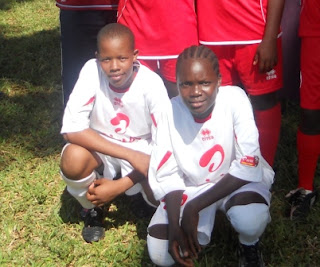 The Nyanza Province Secondary School Tournament is going on this week in Homa Bay. Nine of our Suba Lakers are playing with their secondary school teams. Three are playing for Gekomoni, three for Jera, two for Sindo and one for Kobala. Three of the teams managed to reach the semifinal stage. In the first semifinal Caren Akeyo helped lead Kobala to an emphatic 3-0 win to qualify for the finals.

In the other semifinal we had six of our players competing against each other for the opportunity to go to the finals. It was a tough, hard fought contest with both teams putting pressure on each other. Late in the first half, Jera had a free kick just outside the box. Goalkeeper Eliva Awuor (Suba Laker) dove and got her fingertips on it, forcing it out of the goal and it hit the post and bounced back into the field. Alicent Awuor (Suba Laker) collected the rebound and put it in the back of the next while Eliva was still trying to get off the ground. Jera held on to the 1-0 lead and booked their ticket to the finals tomorrow. 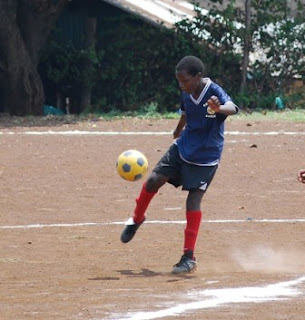 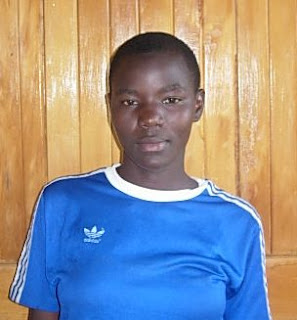 So on Saturday, there will be a rematch of last year's final between Jera and Kobala. Last year it was a battle until the dying seconds when Jera scored a goal in extra time to win the championship and qualify for Nationals. Both teams have reloaded and are stronger this year.  The the final promises to be another nail-biting affair. The four Suba Lakers who are all in their first year of secondary school will be playing on the biggest stage in front of thousands of fans!
Posted by Joe Peterson at 9:22 PM