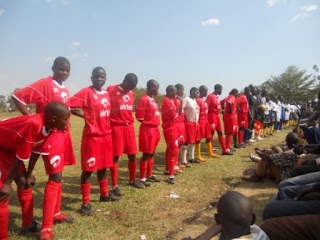 The Nyanza Province Secondary School Girls football final between Jera and Kobala was highly anticipated.  There were three Suba Lakers playing for Jera and one playing for Kobala.  All of them are in their first year of secondary school.  Last year's final matched the same two teams and came down to a goal in extra time from Jera to propel them to Nationals.  This year it was obvious to everyone as the two teams moved through their zonals, districts, regionals, and provencal preliminary games that they were destined to meet again in this year's final.

This time around Kobala began very strong, but it only took Jera a few minutes to move ahead as the goal keeper made a mistake on Jera's free kick and allowed the ball to roll into the goal.   After the goal Jera quickly took control of the game possessing the ball and creating more chances around the goal.  After the first 35 minutes,  Jera was ahead 1-0 going into halftime.  The beginning of the 2nd half looked very similar to the end of the first half with Jera dominating ball possession and creating many chances.  They finally capitalized on one of those chances when the ball was kicked high in the air in the box and Alicent Awuor (Suba Lakers) cushioned the high ball with a soft header directed at the goal.  The keeper lunged for it, but didn't get it cleanly and Alicent poked it in the goal to take a commanding 2-0 lead for Jera.

At that point most people thought the match was over since Jera had a two goal lead in the 2nd half and had controlled the game, especially the midfield.  But Kobala kept fighting.  Buoyed by a couple of substitutes that had a lot of energy, they managed to get a goal back from a free kick with about 10 minutes to go.  As time was winding down, the 4th official signaled to the center referee that time was up, but two minutes were added for injury time.  With Jera ready to celebrate the championship, everything changed when the linesman raised her flag and began running towards the goal signalling for a penalty kick.  It was a very questionable call (especially in the dying seconds) where it looked like the ball might have hit the defender's stomach, but the referee called it a handball and gave Kobala the penalty kick.  They took full advantage by converting the penalty and sending the match into extra time for the second consecutive year. 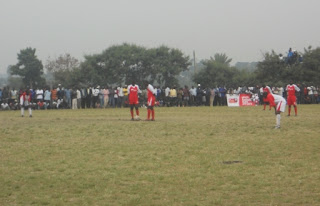 The additional twenty minutes didn't settle the matter so they went for post-match penalty kicks.  Kobala scored each of their kicks and emerged the champions of Nyanza Province.  It was unfortunate that the championship was decided by a referee's call and then by post-match penalties, but it was a great, competitive match that showed the level of girls football in this country greatly rising.   Both teams are extremely talented and well coached.  Kobala will be a good representative for Nyanza at the Nationals in Mombasa.  We hope they can show the country that the best players come from Nyanza.
Posted by Joe Peterson at 10:44 PM