At the beginning of June we received a letter from the newly elected Football Kenya Federation (FKF) inviting the Suba Lakers to join the Nationwide Division 1 Ladies League.  It is a big honor to be selected to be apart of the 2nd highest Ladies League in the country.  There are 12 teams in the Premier League and now they are trying to form another Division so that teams can qualify for the Premier League and teams from the Premier League can be relegated.  Last year in December we reached the finals in our Branch Tournament so our branch nominated us to the team to represent them Nationally. 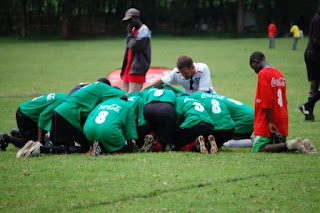 We are still praying about the decision and waiting to find out more information before coming to a conclusion.  At first glance it might seem like a great idea because it will give our girls opportunities to compete against some of the top players and teams across the country.  They will get exposed to new places and it can help to open up doors for them educationally and even in their future careers.  Playing against tough competition on a consistent basis will really help the players develop at a faster rate and the team as a whole will vastly improve.


But there are other factors to consider such as the costs of taking care of the girls’ meals and accommodations every weekend and also travelling to far away places.  Right now all of our players except one are going to school.  All of the secondary girls are in boarding schools.  Being away from home and school every weekend and missing some weekend classes could affect their academics.  Their parents and teachers might also become hesitant in releasing them so often.


We are honored and humbled by the invitation, but we are praying and trusting that God will show us the right direction to take.  We tell our girls to put God 1st, Family 2nd, Academics 3rd and Football 4th so we want to make sure that we also do that same with our decisions.
Posted by Joe Peterson at 9:54 AM