On June 1st Kenya was celebrating its 49th year of independence as a country.  The Suba Lakers used the holiday to take a little road trip within the district.  We loaded up 12 of our youngest players in my vehicle and drove across the causeway to Rusinga Island for a couple of friendly matches.  Many of the club officials and most of the players had never even been to Rusinga Island, though it is just next to Mbita town.  We have about 14 8th graders on our primary school team this year and since they will be sitting their National Exams in November and moving on to secondary school we used this opportunity to give the younger ones (mostly 5th and 6th graders with a few 7th graders) an opportunity to play.  In addition, we were looking for some other good young players from Rusinga to join the club.  We had sent letters to every school in Rusinga to send their best two players from 4th – 7th grade for the matches.


In the morning we were at Kaswanga and played against Rusinga West.  Their organization wasn’t very good and our team took advantage to rout them 5-0, but it could have been much worse.  Theresa Atieno scored the first goal on a free kick and the second one also came on a free kick, this time from Winny Akinyi.  In the 2nd half goals followed from Lenser Adoyo, Brenda June and another one from Winny. 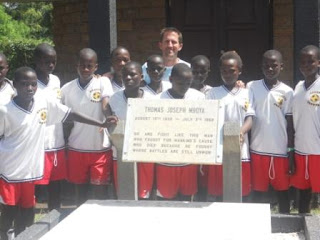 Between games, as we were driving to the next destination, we stopped over at the Tom Mboya Mausoleum.  He is one of the most famous founding fathers of Kenya who was tragically assassinated in the streets of Nairobi in the early 1970’s.  We toured the museum, looked at the pictures and newspaper clippings and were taught by Mr. Mboya’s brother who is the caretaker there.  The girls also enjoyed some nice mangoes from the tree.


In the afternoon, we found a much more organized and talented team at Kakrigu from Rusinga East.  By the time we arrived, the teachers were already with the players and preparing for the match.  They were aggressive and fast which caught our Mbita team by surprise.  Fortunately we managed to score in the 1st half on a cross from Winny Akinyi on the wing to Lenser Adoyo who was waiting for it on the other wing to put it in the net.  The Rusinga East team equalized shortly into the second half on a free kick.  By that point the Mbita team was getting tired after playing 90 minutes in the morning and the same amount in the afternoon, but they fought hard to get two late goals, one from Phylice Akoth and another from Brenda June to finish on top 3-1.


After both matches, we had time to sit the teams down and share with them.  Teacher Lillian talked about making healthy choices in their lives that will help to build a better future.  I was able to use the EvangeCube to share the Gospel in simple terms and challenged them to reach out to Jesus who was ready to save them if they would ask him to forgive them for their sins and invite him into their lives.


It was a very successful day on the field and off the field for the Suba Lakers.  The young girls from Mbita and Rusinga had the opportunity to play and develop their talents.  They were encouraged and inspired physically, academically, socially and spiritually.  And we found a few good players in the process! 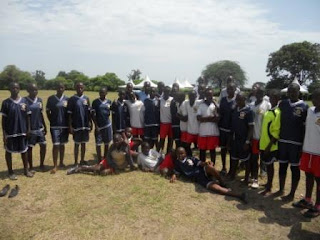