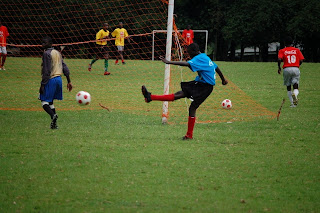 The Suba Laker Primary School girls have been dazzling and exciting fans all across the western part of Kenya for the past few weeks.  In primary schools, the games are like all-star games because the players move through about 7 levels where they play games and at the end of that tournament, the best players are selected to move on to the next level.  At pretty much all the levels are girls have played they haven't allowed any goals and the only matches they have lost were due to post-match penalty shootouts (of which we need to do a lot of work on).  And at each level, the crowds enjoyed watching the "team game" of our girls as they passed, worked together and displayed their high skill level.  Our primary girls are still young and small in stature, but know how to play the game of soccer the right way.

The Homa Bay County team mainly consisted of Suba Lakers from Mbita District reached all the way to the finals of the Provencal Tournament and played a great game against the host county Kisumu.  With all of the fans against us, our girls dominated the game and created numerous chances to score, but never broke through.  In the end, it came down to penalty kicks which gave Kisumu the title.

Fortunately, 6 players from our team were selected to go to Nationals, including 4 Suba Lakers.  Goalkeeper Lillian Awuor will go for the first time, Winny Akinyi and Teresa Atieno will be going for the 2nd time and defender Lavenda Achieng will go for the 3rd time.  It is a huge honor to be regarded as one of the best primary school players in the nation.  We wish them the best of luck as they represent the Lake Region in the games set to take place next week. 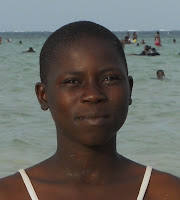 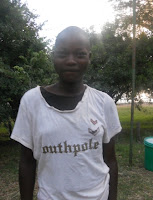