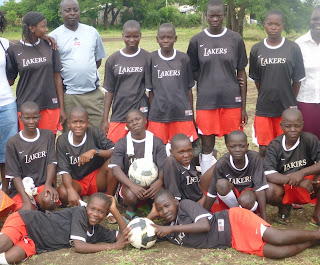 This past weekend the Suba Lakers primary girls participated in the Homa Bay High School BUOP Open Invitational Tournament.  There were secondary schools, teacher training colleges and technical training institutes from different parts of the country competing in many different sports. We were the only one with primary school girls.  There were tons of boys football teams, but only 7 girls football teams.  Since all of our secondary girls are away in boarding schools, we played with our primary school girls and 2 girls that have already finished secondary school.  In fact most of our girls were in 6th and 7th grade and competing against high school and college students.

In the first match we eased through a 1-0 victory over Mawego Girls on a goal by Winny Akinyi.  In the second match we pulled off a 2-0 victory over Ogande Girls with goals by Primerose and Winny.  We emerged 1st place in our pool and proceeded directly to the finals on Sunday afternoon.  We were pitted against Ogari Girls from Migori.  They had also won all of their matches and were a strong team.  We faced off on the main football pitch with thousands of people milling around.  Our opponent might have overlooked us a little... literally.  Every player on the team was at least a head taller than our younger girls.  Our girls were unfazed by the size difference and took it to them from the opening kick, creating several scoring chances before the smallest player on the field gave us a lead from a stunning goal taken outside the box.  When the rebound rolled out to her, Brenda June kicked it with every ounce of strength in her tiny frame and put it right above the goalkeeper's reach.  And the team celebrated enthusiastically.  The Lakers continued to dominate ball possession and our opponents had very few opportunities to get close to our goal.  The game ended 1-0 and the Suba Lakers were able to take home the trophy!