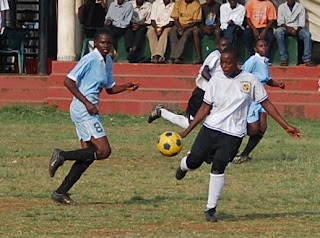 The Suba Lakers played their first game in the inaugural Kenya Division I Ladies League last Saturday, August 18th.  The new football federation has started the 2nd tier league for ladies as a springboard to the Premier League.  Our zone is made up from teams all over the Western half of the country.  The first match was at home against Oserian from Naivasha.  They come from just outside of Nairobi.

Because schools are having a three week holiday, every one of our school going girls were available for the game.  We only had one player missing from the team because she hadn't yet been approved by the Federation.

Oserian scored in the 10th minute on a goalkeeping error, but the Lakers battled back to score a goal in the 2nd half in the 60th minute.  Dorothy Adhiambo struck it into the back of the net.  A few minutes later Pheny Akoth also hit the back of the net with a header, but for some unexplained reason the referee disallowed the goal and brought the ball back for a free kick instead.  Even though the Lakers battled hard, Oserian later netted the winner in the 80th minute to take home a 2-1 win over the Suba Lakers. 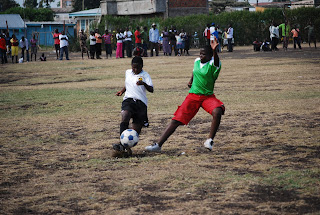 The Lakers will travel to Eldoret and Kakamega this weekend for two more matches.
Posted by Joe Peterson at 10:22 PM