Looking Ahead to Secondary 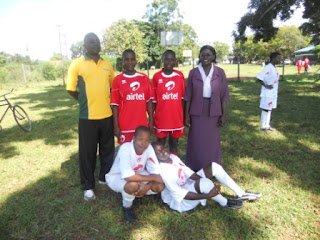 Our ten Standard 8 students finished their National Exams on Thursday and are now anxiously awaiting their results which will be released at the end of December.  We are hoping and praying that they will do well and have the opportunity to continue their education in secondary school if they pass and God provides the funds for them.
Four of those students were invited to a secondary school for a tryout this weekend.  Our club chairman, Paul Onundo, and our team manager Eunice Oluwanda, and myself (Joe Peterson) were able to drive Raisha, Alicent, Lydia and Leah to Siaya County to visit Jera Mixed Secondary School.  Jera is a powerhouse in girls football winning the Nyanza Provencial Championship 11 times in the 14 years since the province began competing in girls football.  This past year they won the province again and made it to the National Semifinals with mostly 1st year students before getting defeated by the eventual national champions.  One of their first year students from Jera was one of two girls in the country selected to go for a special training with Manchester United.
The school was a little bit far from Mbita.  After crossing the ferry, it took us two more hours driving before we reached.  Upon entering the school gate we were greeted by their players who were ready to give us a tour of the school.  It is a medium sized school with around 500 students.  Each grade has three classes of around 50 each which is a good size for a Kenyan school (most have more than that in each class).  The staff and students were very friendly and helpful to all of us.  It seemed like a big family with the way they interacted.

After the tour, the girls filled out an information sheet and then they were given a uniform to change into.  It was the same uniform that Jera was given when they qualified for Nationals.  The Jera players took the girls through warm-up drills before they started playing. 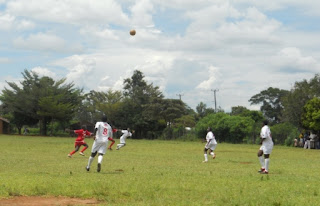 Playing in front of all the students and staff of the school, our girls didn't show any nervousness and competed hard, mixed in with the regular Jera players and other girls trying out.  Alicent scored a goal within the first ten minutes and the others also displayed their talents, while playing very good team ball.  They played three halves which gave the coaches enough time to evaluate the players, but tired the players out; especially since the ones trying out have not been training very much over the past few months while they were preparing for their national exams.  Alicent closed the games with the final goal.  After practicing their penalty kicks, they did some stretching and talked in a group for a while.  The program closed with a great meal and speeches by various teachers from the school and the special guests.
Overall, we were very impressed with the friendliness of the staff and students.  We liked how organized they were.  The school's academic performanceis above average, but they really try to focus on holistic education by helping their students develop their talents and abilities in many areas.  It is obvious their coach really knows football and how to train a football team.  He is an honest man who interacts very positively with the girls. 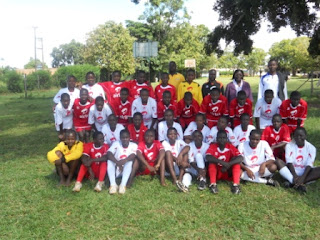 Once the results come out in late December they will offer some of these players an opportunity to come to their school for a reduced school fee.  We were grateful to Jera for giving our girls the opportunity to come and tryout.
Posted by Joe Peterson at 10:33 AM