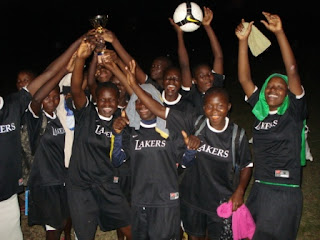 SEP (Society Empowerment Project) in Oyugis hosted their third annual tournament at Kotieno Primary School over the weekend, August 12-14th. Eight boys teams and eight girls teams participated in the event. On the girls side Suba Lakers Girls Football Club hoisted the trophy after their 1-0 victory in the finals against the host SEP team. Pauline Otieno scored the lone goal in the tenth minute of the first half.

Earlier in the semifinals, SEP had defeated ISDAK Kisumu on post-match penalty kicks. IN the other semifinal, the Suba Lakers coasted to a 3-0 victory over Angaza from Thika on 2 goals from Sharon Bismark and a goal from Dorothy Adhiambo. The Lakers had earned the top spot in their pool by drawing in their first match and then winning 1-0 in the second match and 7-0 in their final preliminary match.