On Friday, we piled twelve girls football players in my vehicle and ten more in a little sedan. The Suba Lakers were competing in the Safaricom sponsored Sakata tournament in Homa Bay. The previous day was quite chaotic in Mbita with poor organization and poor communication, but since we were the only girls team to show up at the district level we were declared the winner and punched our ticket to Homa Bay for the regional.

In the first match in Homa Bay we defeated Lala Secondary School 4-0 on goals by Leah Awuor, Dorothy Adhiambo, Pauline Aoko and Beatrice Awuor. In the 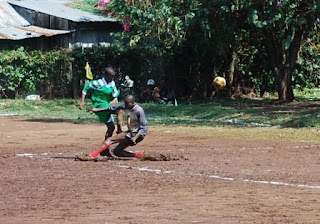 finals we were matched up with the winner from Rachuonyo District, Victoria Football Club. We had played them last year in the Galactico tournament in Kisumu and lost on a last second goal 1-0. Since that time, their club has managed to qualify for the Kenyan Ladies Premier League by defeating all of the competitors from Nyanza Province, Rift Valley Province and Western Province. They have a very strong team.

The first half was evenly played with neither side getting a very good opportunity to score. Our girls began the 2nd half aggressively and it paid off when Caren Akeyo put Beatrice Awuor's cross in the back of the net about ten minutes into the half. It came in the nick of time as just a few minutes later the rain began pouring down. The field quickly turned into a mud bog and both teams were slipping and falling down everywhere. It was like a comedy show and it would have made a great detergent commercial. By the end of the match our red uniforms were brown and all of the football cleats and socks had been taken off and thrown to the sidelines. We held on for a hard fought 1-0 win.

All of our reserve players who had been taking cover under the canopy, ran onto the field and began celebrating the championship. During the celebration, they managed to get as dirty as the ones who had been playing. I was not spared either. When the rains began, everyone went to take cover, but I knew that the girls would not feel good if they were left out 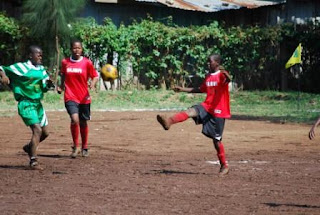 in the rain to play while everyone else was staying dry. So I stood alone on the sidelines in the downpour and tried to encourage them and shouted even louder.

The girls showed great courage and determination to pull out the victory.

We will travel back to Homa Bay on Sunday to play the winner from Migori County to see who gets to proceed to Kisumu for the Regional Tournament in June.