This year the KYFA Nationwide Ladies Tournament was much more than football. They were able to provide meals and accommodation so that all 20 teams could eat and sleep at the same venue. They had special programs every night and every morning. The team was“Football and Beyond.” They brought in successful young women to share with the girls. Their talks were challenging and inspiring to these young ladies. They encouraged them to be bold and learn to speak up when necessary. They talked about setting goals and working towards achieving them. As they shared their life stories, they also talked about the challenges and obstacles that girls in Kenya face, and how to overcome them. On the last night, each team performed a skit on how to “Overcome the Odds.” As an organization, we began the Suba Lakers to use football as a means to impact the lives of young girls physically, socially, academically and spiritually. It was great to be involved with a tournament that is trying to do the same thing. 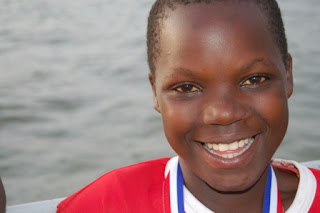 Another “highlight” of the weekend was seeing a tournament actually uphold a standard of integrity. One of the semifinal teams brought in a new player on the last day for their semifinal match which was strictly against the rules. The new player actually scored the game winning goal, but afterwards the losing team lodged an official complaint. After investigating it was found to be true and the team was disqualified. It happened to be a local team and the coach incited the players to protest by not playing in the 3rd place playoff and instead sat on the field where the finals were supposed to be played. The local fans were also incited and threatened to throw stones and not allow the finals to begin unless their team was allowed to play. KYFA stood their ground and eventually an official was able to convince the team to leave the field so that the finals could take place. Most of the time in this country, corruption and cheating is just accepted with no consequence. It was good to see someone make a stand for truth and integrity, even if it meant making enemies with a local team and even local fans in favor of a team from outside the area. Maybe things are slowly starting to change in this country!
Posted by Joe Peterson at 9:07 AM