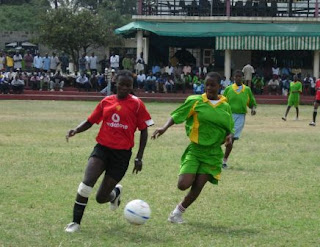 We took our top team to Kisumu this weekend for the Sakata Regional Finals. The best part was that it didn't cost us any money. The tournament paid for our transportation, meals and accomodation. Nothing came out of our own pocket. They put us up in a hotel and some of our girls were using flush toilets and taking hot showers for the first time.

When we reached on Friday afternoon, we trained for a short time and then they brought us to the conference room so a speaker could share with them about life skills. He talked about their future and their dreams. They discussed choices that would help them reach their dreams and obstacles that would derail their pursuit. He shared about discipline and hard work in the classroom and on the field. They received some great lessons.

When the tournament began on Saturday, we were matched against the best team in the semifinals. They were older women that compete in the Kenya Women's Premier League. When we first played them 4 years ago, they defeated us 9-0, then 4-0 three years ago, then 2-0 two years ago and finally 1-0 last year.

After about 5 minutes they scored their first goal on a cross that was headed over the goal keeper who had mistimed her jump. I think many people expected a blow-out, but we quickly rebounded by equalizing a few minutes later on a goal from Pauline Aoko. Unfortunately at the end of the 1st half we gave up another goal to go down 2-1. In the 2nd half Irine Achieng and Dorothy Adhiambo both had good shots at the goal, but were stopped by the goal keeper. Neither team converted another goal in the last half so it ended in a 2-1 defeat for us. The other team went on to win the finals in a lop-sided affair.

Our young girls put up a good fight, but couldn't pull it out in the end. We definitely made a positive impression. Even the next day, people around the field were still talking about the fight our girls put up. They didn't expect our young girls to be able hold a giant like that. They were commenting that our game was like the final because it was the two best teams. People were also impressed with our team's attitude towards the officials, referees and the other team.

It was a good showing, but it was unfortunate we couldn't have played one of the other two teams in the semifinals so that we could have reached the finals.

I am keeping faith that God will soon reward us for our faithfulness and honesty in these tournaments against some of the big teams.
Posted by Joe Peterson at 1:37 PM